Over a century ago it was observed that sub-millimeter sized particles adsorb at fluid interfaces and that, once adsorbed, these particles can attract each other and clump together allowing for the formation of stable 2D structures. From a qualitative point of view an adsorbed particle in general induces deformations in the shape of the fluid-fluid interface and these capillary deformations are in turn responsible for capillary interactions that are usually strong enough to induce the formation of the mentioned 2D structures. Such a self-assembly process depends strongly on the so-called contact angle, that determines the curvature of the fluid-fluid interface, and on the particle’s shape and surface chemistry. By tuning these factors it is possible to control the formation and the properties of the 2D structures.
A theory able to explain in a complete manner the self-assembly of particles at interfaces and to make quantitative predictions has not yet been elaborated. Indeed, following a pioneering study by Pieranski [1], the theoretical predictions are usually based on the assumption that the fluid-fluid interface remains flat even when the particle is adsorbed and it thus ignore the capillary deformations induced by the particle. Nevertheless a new numerical method has been recently developed that goes beyond Pieranski’s approximation and takes into account the capillary deformations [2]. By using this new method it has been possible to show that neglecting capillary effects can lead to erroneous predictions and, at the same time, it has been possible to predict self-assembly of particles in agreement with experimental observations [3]. The goal of my project is to use the new elaborated numerical method in order to obtain new theoretical predictions and a better understanding of the self-assembly of particles at fluid interfaces. 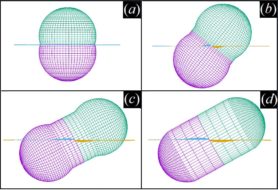