We study concentrated colloidal dispersions subjected to external fields such as gravity, an electric field, or shear flow. This way we can manipulate the particles to assemble into complex ordered structures, to undergo (non-equilibrium) phase transitions, or to form patterns. The 3-dimensional structure and dynamics are studied mainly using confocal microscopy, but also with scattering techniques and rheology. For these experiments new colloidal particles with anisotropic shapes or interactions or with a composite core-shell structure are developed.

Some examples are shown in the figure below. Rod-like silica spheres developed in our lab are an ideal system in which to study equilibrium assembly into ordered structures using microscopy. Using image analysis and particle tracking algorithms we follow the positions and orientations of thousands of individual particles, leading to new insights in their collective behavior. An electric field polarizes and pulls on charged particles, and forces them to form yet different structures. We also apply them to keep the system far out of equilibrium to induce the formation of patterns such as lanes and bands. Shear flow is used in a similar way to study ordering and disordering behavior of colloidal systems far out of equilibrium. 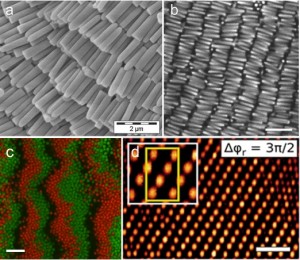 Fig. 1 (a, b) Ordered structure (smectic phase) formed by colloidal silica rods. (c) Pattern formation in a mixture of oppositely charged particles in an electric field. (d) Colloidal crystal formed by applying a shear flow to an initially disordered suspension.