Recent advances in the chemical synthesis and fabrication of colloidal particles have resulted in a spectacular variety of new colloidal building blocks. The main challenge is to exploit this huge variety of available colloidal building blocks and to self-assemble them into structured arrangements for advanced and functional materials and devices. The fabrication of these so-called ‘nanomaterials’ with a well-defined structure on the scale of tens to hundreds of nanometers, makes these materials perfectly suited for the manipulation of (visible) light. Hence, colloidal crystals with lattice spacings similar to the wavelength of light are considered to be prime candidates for the fabrication of photonic band-gap materials with potential applications in highly efficient light-emitting diodes (LEDs), solar cells, sensors, and optical computer chips. Additionally, nanomaterials with the right properties are likely to be instrumental in the development of new photovoltaic cells and electronic displays. The potential use of the spontaneous self-organisation of colloids as a promising and inherent cheap route for the fabrication of nanostructures requires not only the ability to tune the properties of the colloidal building blocks, but also a better understanding of the relation between the building blocks, their interactions, and the self-assembled structures. Additionally, the tunability of the effective interactions between the colloidal particles offers great opportunities. To be more specific, colloidal particles with anisotropic interactions can be synthesized by controlling the shape of the particles, or by creating ‘patches’ on the surface of the particles. The interactions between the particles can also be altered by modifying the dispersive medium, i.e. the addition of salt to the dispersion leads to screening of the electrostatic interactions, the presence of non-adsorbing polymer results in effective depletion attractions, critical Casimir forces arise due to the confinement of long-range density fluctuations when the host fluid is close to a critical point, and solvent-mediated interactions can arise when the solvent approaches a binodal. One can further modify the interactions by application of e.g. external electric and magnetic fields, templates, gravity, etc. Exploiting the self-assembly of these novel colloidal building blocks calls for theoretical tools to predict the structure and phase behavior of these particles. 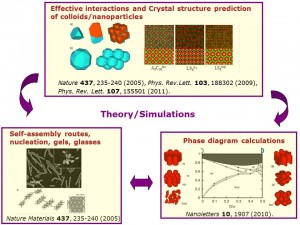 Our research group uses theory and simulations to obtain a better fundamental understanding on how colloidal building blocks self-assemble and how the self-assembly process can be manipulated by external fields such as gravity, templates, air-liquid or liquid-liquid interfaces, and electric fields. In order to predict the structural properties and phase behavior of colloidal particles, one first identifies the possible ”candidate” structures in which the particles with given interaction potentials and system parameters may assemble. To this end, we have developed an efficient and robust method based on simulated annealing to predict candidate structures of colloidal building blocks. The equilibrium phase diagram can then be determined by calculating free energies of the candidate structures in Monte Carlo simulations. In addition, it is important to  investigate the kinetic pathways and nucleation rates to form the equilibrium structures as the self-assembly may be suppressed by kinetic effects such as vitrification, gelation, defects and stacking faults. A new promising research direction is to employ so-called active systems which continuously convert energy either from an internal energy source, e.g. catalytic reactions, or from an external source, like electric or magnetic fields, into motion to obtain structures with new properties and functionalities that cannot be achieved in equilibrium, and may perform tasks on demand and respond to external stimuli. We employ Monte Carlo, (event driven) Molecular and Brownian Dynamics simulations, Stochastic Rotational Dynamics simulations to include hydrodynamics, Umbrella and Forward flux sampling, free-energy calculations based on thermodynamic integration methods, and simulated annealing techniques to predict candidate structures, to determine the (non)-equilibrium phase behavior of colloids, nanoparticles, liquid crystals, etc. A better insight in the self-assembly process is essential for developing new materials.