Due to potential technological applications as in data storage [1], catalysis [2] or medicine [3] the structural deformation of uncoated gold nanorods (Au NRs) has attracted much scientific attention. However, little effort has been made to study the heat-induced deformation behavior of coated gold nanorods. Coatings of metallic nanoparticles with silica can enhance the thermal and colloidal stability of the particle and additionally influence the deformation process. Au NRs have two plasmon resonances associated with their shape. The longitudinal surface plasmon (LSP) resonance is tunable with the aspect ratio of the rod. By exciting this resonance with an ultra-short high-intense laser pulse the NR undergoes a shape transformation well below bulk melting temperatures.

The aim of this research project is to execute and analyze the deformation process of the same single particles before and after deformation as shown in figure 1a, including particles which are part of 2D or 3D self-assembled structures. Single-particle EELS measurements, shown in figure 1b, confirm the corresponding shift of the LSP peak. Furthermore, we compare the deformation process due to laser excitation and external heating. The underlying deformation mechanisms seem to be very different. The methodology will be also extended to semiconductor NRs. 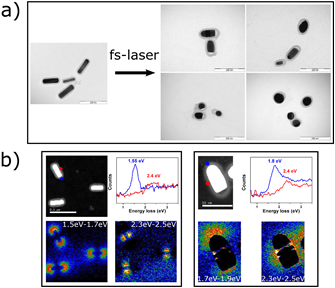