The aim of this work is to study the formation of quasicrystals in colloidal systems. Quasicrystals are ordered, non-periodic structures initially discovered in metallic systems. Recently, various quasicrystalline phases have been observed in soft-matter systems like binary nanoparticle mixtures, terblock star polymers, and micellar systems [1]. Theoretical studies have confirmed the presence of photonic band gaps (PBGs) in quasicrystals, which prevent the propagation of light of certain wavelengths. In addition, by virtue of the quasicrystalline structure, these PBGs are found to be less sensitive to structural defects [2]. Colloidal quasicrystals, of sizes in the range of visible light, can result in solar cells with increased photon path length, thereby, increasing the chance of photon absorption. Further, the arrangement of nanoparticles can serve as a plasmonic structure characterized by strong Mie resonance, which can be used to enhance the efficiency of light-trapping in solar cells.

The current project deals with a study of quasicrystalline phases in colloidal systems using Monte Carlo simulations. The challenge is to simulate a system of submicron-sized colloidal particles in order to obtain a quasicrystalline structure in the length scale closer to that of visible light. The systems studied so far are much smaller in size and range from 0.5 nm metallic alloys to 80 nm star polymers. Initially, a quasicrystal forming system of disks is simulated. Then, a phase diagram will be chalked out to study the stability of the obtained quasicrystal. Further, the PBG diagram of this system will be calculated. 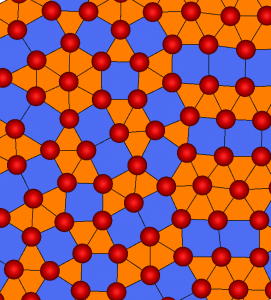 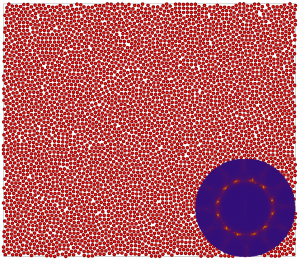 Figure 1: (a) Typical configuration of a 12-fold quasiperiodic structure. Inset shows the 12-fold diffraction pattern (b) A zoom in to show more clearly the  random square and triangular tiling