Solvent-mediated (SM) interactions, such as the critical Casimir effect (first predicted by Fisher and de Gennes [1]) and wetting induced interactions, are generally thought to drive particle aggregation and colloidal self-assembly processes in a tuneable, reversible, and in-situ fashion due to their strong dependence on temperature and on solvent composition. In many cases, a salt might be present in the solvent mixture, leading to an even richer gamut of effects, due to the coupling of the ionic and SM interactions [2]. 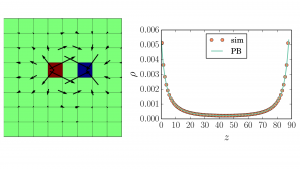 For this project, we extend the lattice model developed in our previous work on colloids in near-critical binary solvents (see previous Debye booklet), to include finite salt concentrations. This is done by using a model, recently developed by A. C. Maggs [3]. The benefit over other methods of calculating Coulombic interactions, is that this is done in O(N) amount of work, where N, the number of ions, making the inclusion of Coulombic interactions in our Monte Carlo simulations feasible. Additionally, it enables us to study the effects of a locally varying dielectric permittivity, without worrying about image charges. The model we have developed constitutes a framework which will allow us for the first time to study the ionic effects in binary solvent mixtures and in various different setups.

A binary mixture close to its critical (demixing) point exhibits large fluctuations in composition, characteristic of a second order phase transition. If these fluctuations are confined between two preferentially adsorbing bodies, an effective solvent mediated force arises between the bodies, which is analogous to the quantum Casimir effect.
In a previous study [1], we ignored electrostatic interactions. In nature, real solvents have some degree of polarity, and some small concetrations of salt are usually present. These solvents are formally called electrolyte solutions. Moreover, close to the solution’s critical point, the fluctuations of the solvent composition, couple to the thermal fluctuations of the electric field, leading to very complex interactions.
We investigate the effect of electrostatic interactions in electrolyte solutions using Monte Carlo simulations. More specifically, we investigate the phase behavior of the solution as a function of the dielectric constant of each solvent species, and varying salt concentrations. We use a simple lattice model of a binary mixture, and treat the electrostatics using a method developed by A. C. Maggs [2].

Figure 1: Phase diagrams of an electrolyte solution for varying salt concentrations. Here τ is the distance of the temperature from the critical temperature temperature of the lattice-gas (LG) solvent, and x is the composition.
[1] Edison, et al., Physical review letters 114, 3 (2015)
[2] Maggs, A. C., The Journal of chemical physics 120 7 (2004).