Oil–water mixtures are ubiquitous in nature and are particularly important in biology and industry. Both surfactants and colloidal particles can be used to prepare these mixtures, the latter forming so called Pickering emulsion. One of the aims of the current project is to develop permeable shells that can act as ‘smart containers’ for chemicals like (liquid) surfactants and which can release the content near an oil-water interface. Such systems are for instance interesting for enhanced oil recovery (EOR), as encapsulation can prevent redundant surfactant loss whereas the interfacial tension between oil and water can be lowered upon release of the material. For this, permeable microcapsules were synthesized based on a modification of the procedure discussed in [1], and could act as microcarriers by filling them with a non-ionic liquid surfactant. The encapsulated surface active material was found to be spontaneously released in the vicinity of an oil-water interface (Figure 1), most likely driven by the preferred partitioning of the surfactant in the oil phase. In addition to these studies, we also focus on stabilization of the oil-water interface by means of particles. So far, such interfacial studies concerned wetting colloids which penetrate the interface. Here, addition of salt can result into 2D (in plane) melting of a colloidal solid because of the irreversible adsorption of the micron-sized particles. Recent results showed that in our system, colloids could be detached from the interface by addition of salt only. This irreversible behaviour suggests that particles are non-touching, meaning that they are completely immersed in the oil phase. In principle, the entrapment of non-touching colloids near an oil-water interface could be theoretically explained by a balance between image charge attractions [2] and Van der Waals repulsions [3]. Current research focuses on this system. 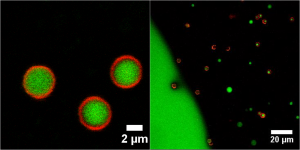 Figure 1: Confocal microscopy images of permeable shells, filled with a stained liquid surfactant phase (left), that release their core material in the vicinity of an oil-water interface (right).