PhD student in the simulations group of Marjolein Dijkstra

Predicting the macroscopic chiral behaviour of cholesteric liquid crystals from the microscopic chirality of the particles is highly non-trivial, even when the chiral interactions are purely entropic in nature. In fact, a prediction of the cholesteric pitch, the typical length scale associated to the macroscopic chirality, based only on geometric properties of the particle is not possible. For example, we have previously shown that for systems of hard helical particles, both right-handed and left-handed cholesterics and a possibility of observing a sense inversion upon increasing density, can be predicted from right-handed shapes.

We introduce a novel chiral hard-particle model, namely particles with a twisted polyhedral shape and obtain, for the first time, a stable fully-entropy-driven cholesteric phase by computer simulations. By slightly modifying the triangular base of the particle, we are able to switch from a left-handed prolate to a right-handed oblate cholesteric phase using the same right-handed twisted prism model. Furthermore, we find a qualitative agreement between the equilibrium cholesteric pitch obtained by computer simulations and the one predicted by a recently developed Onsager-like theory, suggesting that the latter can be used as reliable tool to quickly scan the huge parameter space associated to the microscopic chirality. Our results unveil how the competition between particle biaxiality and chirality is reflected into the nematic self-organization and new theoretical challenges on the self-assembly of chiral particles can now be undertaken.

Figure 1: (a) Twisted triangular prisms as model system to study steric chirality. (b) Cholesteric phase obtained by computer simulations. Particles are colored according to their orientation and two projections of the corresponding nematic director profile are shown. (c) Blue phase made of twisted polyhedra.

The origin of chirality in colloidal liquid crystals

Chirality plays a paramount role in life, chemistry, and materials science. Chiral arrangement of particles are also often found in liquid crystals, phases featuring orientational but no (or only partial) positional order. Whereas the nematic director of a common nematic phase is homogeneous throughout the system, the chiral nematic (a.k.a. cholesteric) phase displays a helical arrangement of the director field. In spite of the huge relevance for optoelectronic applications, the relation between the macroscopic chirality of the liquid crystalline phase and the microscopic chiral details (shape, interactions) of the constituent molecules is still not well understood.

We develop a density functional theory combined with a Monte Carlo integration method (hybrid DFT-MC), that allows us to unveil the non-trivial relation between macro and micro chirality in colloidal liquid crystals.

When applied to right-handed hard helices, our theory predicts an entropy-driven cholesteric phase, which can be either right- or left-handed, depending not only on the particle shape but also on the thermodynamic state. We explain the origin of the chiral ordering as an interplay between local nematic alignment and excluded-volume differences between left- and right-handed particle pairs.

Moreover, we extend our study to mixture in order to address other fundamental questions, e.g. how many dopants are needed to induce chirality in a uniaxial nematic phase of achiral particles or under which conditions a phase separation between particles with opposite handedness occurs. 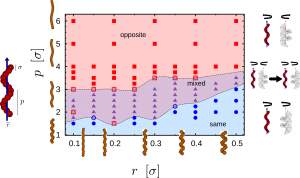 Hard spheres serve as indispensable model system in condensed-matter studies. It is well established that hard spheres in bulk crystallize into a face-centered-cubic (FCC) crystal. However, we show, both by real-space measurements on nano- and micron-sized colloids and via computer simulations, that when a large number (tens of thousands) of hard spheres are spherically confined they do not self-assemble into the stable bulk crystalline phase but rather they form icosahedral clusters. These structures closely resemble the Mackay icosahedral clusters formed by attractive particles. However, as we confirm via computer simulations, the presented clusters form even in the absence of any attractions and are entropically favored over the face-centered-cubic (FCC) crystal structure that is stable in the bulk. In conclusion, our study shows that entropy and spherical confinement suffice to form large clusters with icosahedral symmetry and this sheds new light on this peculiar symmetry that is also readily found in many other systems, e.g. liquids and glasses, but only locally.

In collaboration with experimentalists in our group, we study the phase behavior of mixture of colloidal (hard) rods and spheres.

We investigate the phase behavior of charged soft dumbbells, particles composed of two soft but oppositely charged sites, using state-of-art computer simulations techniques. For elongated dumbbells we recover the expected gas-liquid phase separation. However, reducing the elongation the gas-liquid critical point disappears from the accessible region of temperature and density. Correspondingly, the self-assembly of particles in ring structures becomes dominant with respect to the formation of chain-like structures. Our results provide new insights on the competition between self-assembly and phase separation and contribute to the long-standing dilemma about the putative gas-liquid criticality in dipolar fluids.