Self-assembly of hard spheres under gravity and spherical confinement

We study the sedimentation of colloidal hard spheres using event-driven Brownian Dynamics simulations (of pure and binary mixtures) to investigate the formation of crystal phases along the sedimentation column. We obtain large single FCC crystals with very few extended defects from sedimenting pure hard spheres at high speeds on an FCC (100) template [1]. Such a crystal is shown in Figure 1. We also study binary hard spheres under sedimentation, for which case we correlate the sedimentation equilibria to the bulk thermodynamics using a theoretical construct known as a stacking diagram [2]. A stacking diagram comprises a set of all possible stacking sequences of phases formed by binary mixtures in a sedimentation column. Our aim is to obtain the stable Laves phase (a binary crystal with photonic properties), which is known to form in bulk for a diameter ratio of 0.76 to 0.84, via sedimentation. 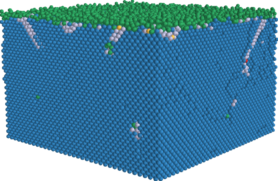