How do simple, classical interactions give rise to the astoundingly rich and complex structures that form on the nano- to micronscale? To address this question, my research group uses, and develops, a combination of state-of-the-art computational and machine learning algorithms to study self-assembly in soft matter systems – both in and out of equilibrium. My research has made significant contributions to our understanding how defects manifest in colloidal crystals, crystal nucleation, the relationship between structure and dynamics in supercooled liquids, and self-assembly behaviour in active colloids. Two themes of particular focus in my group at the moment are i) understanding the interplay between defects and phason strain in the self-assembly of soft matter quasicrystals ii)harnessing machine learning algorithms to shed new light on colloidal self-assembly.

Few questions in condensed matter science have proven as difficult to unravel as the interplay between structure and dynamics in supercooled liquids. To explore this link, much research has been devoted to pinpointing local structures and order parameters that correlate strongly with dynamics. Here we use an unsupervised machine learning algorithm to identify structural heterogeneities in three archetypical glass formers—without using any dynamical information. In each system, the unsupervised machine learning approach autonomously designs a purely structural order parameter within a single snapshot. Comparing the structural order parameter with the dynamics, we find strong correlations with the dynamical heterogeneities. Moreover, the structural characteristics linked to slow particles disappear further away from the glass transition. Our results demonstrate the power of machine learning techniques to detect structural patterns even in disordered systems, and provide a new way forward for unraveling the structural origins of the slow dynamics of glassy materials.

We introduce a simple, fast, and easy to implement unsupervised learning algorithm for detecting different local environments on a single-particle level in colloidal systems. In this algorithm, we use a vector of standard bond-orientational order parameters to describe the local environment of each particle. We then use a neural-network-based autoencoder combined with Gaussian mixture models in order to autonomously group together similar environments. We test the performance of the method on snapshots of a wide variety of colloidal systems obtained via computer simulations, ranging from simple isotropically interacting systems to binary mixtures, and even anisotropic hard cubes. Additionally, we look at a variety of common self-assembled situations such as fluid-crystal and crystal-crystal coexistences, grain boundaries, and nucleation. In all cases, we are able to identify the relevant local environments to a similar precision as “standard,” manually tuned, and system-specific, order parameters. In addition to classifying such environments, we also use the trained autoencoder in order to determine the most relevant bond orientational order parameters in the systems analyzed.

Self-propelled particles, also known as active particles, incessantly convert energy into self-propulsion, and as such are intrinsically out-of-equilibrium. While traditionally such particles occurred solely within the purview of natural systems (e.g. bacteria), recent experimental breakthroughs have led to many novel types of synthetic colloidal swimmers. These systems exhibit a wealth of new phase behaviour, including motility-induced phase separation into dense and dilute phases, giant density fluctuations, and swarming.
Moreover, experimental and simulation studies have shown that the dynamics of a passive
system can be altered dramatically by incorporating as little as 1% of active particles into the
system.  At these concentrations, the self-propelled particles can be viewed as active “dopants”, which like passive dopants can strongly alter the properties (e.g. dynamics) of the underlying passive system.   We use simulations to explore the behaviour of two- and three- dimensional colloidal (poly)crystals doped with active particles. We show that these active dopants can provide an elegant new route to removing grain boundaries in polycrystals.

Self assembly of active attractive spheres

One of the most exciting recent developments in the field of colloidal self-assembly is the realization of synthetic, self-propelled colloidal particles. Like living organisms, these “active” colloidal particles convert energy from their environment into directed motion. As a result, these systems are inherently out-of-equilibrium, and are not bound by the laws of equilibrium statistical physics – making them both very intriguing and challenging to study. 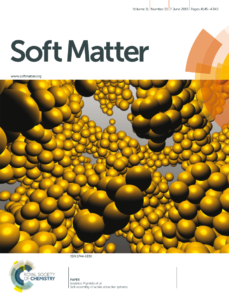 Here we used Brownian Dynamics simulations to examine one of the simplest examples of such an active system: namely a system of active, attractive spheres in three dimensions, where the attraction was modeled using the Lennard-Jones potential. We extracted how the state diagram was affected by the speed with which the particles rotated. Specifically, for slow rotational diffusion, we showed that the gas-liquid coexistence is transformed into a novel percolating network state. Interestingly, this state exhibits high degrees of local orientational alignment of the self-propulsion axis, despite the absence of an aligning force in the model. We also propose a simple mechanism which explains how this alignment and simultaneously rationalizes how activity changes the state diagram. 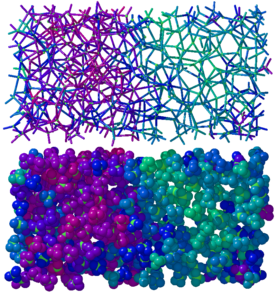 One of the most fascinating yet controversial hypotheses for explaining the origin of the numerous thermodynamic anomalies characterizing liquid water postulates the presence of a metastable, second-order, liquid–liquid critical point (LLCP) . Located in the so-called ´´no-man´s land´´, where spontaneous crystallization obscures the liquid–liquid phase transition, it is impossible to directly access the LLCP experimentally in order to conclusively prove its existence. Here, we use a simple, single-component patchy-particle model to identify two key ingredients controlling the existence of a LLCP, namely the softness of the interparticle interaction and the flexibility of the bond orientation. We systematically explore the phase behavior of this model, mapping out the competition between crystallization and liquid–liquid phase separation. We show that for certain choices of the interaction parameters, the liquid–liquid phase transition can be made thermodynamically stable, enabling the study of this phenomenon without interference of crystallization at any temperature. Realizing these conditions in soft-matter systems would open up the possibility to experimentally probe liquid–liquid phase transitions, shedding new light on the phase behavior of water and similar tetrahedral liquids. 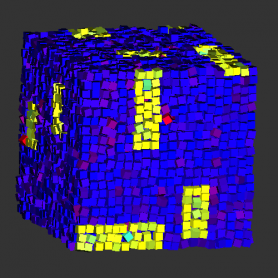 We examined the effect of vacancies on the phase behavior and structure of hard cubes using event-driven molecular dynamics and Monte Carlo simulations. We found a first-order phase transition between a fluid and a simple cubic crystal phase which is stabilized by an amazingly large number of vacancies: near bulk coexistence the net vacancy concentration is approximately 6.4%, which is more than two orders of magnitude higher than that of hard spheres. Remarkably, we also found that vacancies increased the positional order in the system. A closer examination of the vacancies showed that they were delocalized and extended over several lattice sites. A snapshot of a typical configuration is shown below where the vacancies and the particles which surround the vacancy have been highlighted.